The Duramax diesel engine available on 2011-2016 GM full-size trucks and vans requires injection of Diesel Exhaust Fluid (DEF) as an integral part of the exhaust after-treatment process that reduces emissions. DEF is a colourless, clear solution of water and nitrogen-based urea product that has 32.5 percent urea by weight. DEF is naturally occurring and biodegradable. However, it is slightly alkaline, which means it's corrosive to metals.

The Duramax diesel engine exhaust after-treatment system reduces oxides of nitrogen (NOx) using a Selective Catalyst Reduction (SCR) system, a DEF injection system, and two NOx sensors and smart module assemblies. SCR technology permits NOx reduction to occur in an oxidizing atmosphere. It's called selective because it uses ammonia to reduce NOx levels as a reductant within a catalyst system. The reducing agent is automotive-grade urea, or DEF, that reacts with NOx to convert the pollutants into nitrogen, water and trace amounts of carbon dioxide. The urea is quickly hydrolyzed to produce oxidizing ammonia.

The Engine Control Module (ECM) controls the DEF delivery system based on engine NOx emission levels and NOx sensor feedback. The injected DEF mixes with the exhaust gas before contacting the SCR system.

DEF Warning Messages
An adequate supply of DEF is critical for the reduction of NOx levels and to maintain proper after-treatment system operation. A series of prompts and warnings are initiated when the DEF level falls below a calibrated value to ensure the vehicle remains compliant to emission regulations.

The ECM monitors the DEF level and consumption rate in order to calculate an estimated range in kilometres remaining until the DEF reservoir is empty. Typically, DEF warnings are displayed on the Driver Information Center (DIC) beginning once the estimated mileage falls below 1609.34 kilometres. Once initiated, DEF warnings grow increasingly more serious as the remaining mileage decreases without a DEF refill. The vehicle's current DEF warning level is displayed on the scan tool as Reductant Level Warning Indicator Command Level 1 through Level 9. If the vehicle is not in any warning strategy, it will be displayed as None.

If a combination of the above conditions exists simultaneously on a vehicle, the order of repair must be followed by using the DIC messages as the guide to what needs to be repaired first. The DIC will always display the correct order of repair. 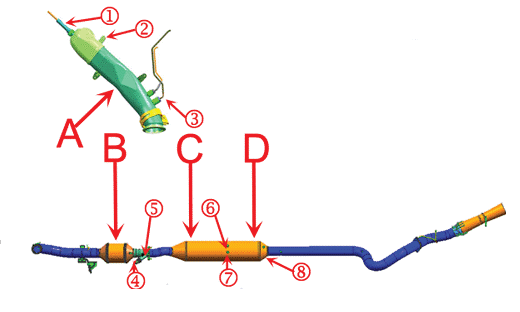 Frozen Tank Status
In operating temperatures of -9° C or less, the "Exhaust Fluid Range" message may display on the DIC even though the DEF fluid has been filled. This may be caused by frozen DEF. DEF behaves like water and will freeze at -11° C.

When the DEF is frozen, the level sensor cannot determine the fluid level in the tank. If this occurs, the logic of the ECM will assume a default fluid level. As a result, there is a possibility the "Exhaust Fluid Range" message can set with the range from approximately 1609.34 km to less than 482.803 km, even though the tank is full.

This is an operating characteristic of the system. When in frozen tank status, refill detections are not allowed until the warning strategy reaches the point at which the distance remaining is less than 482.803 km. The refill detection is dependent on the DEF thawing enough that the level sensor pins can be read.

DEF Tank Filling Instructions
The capacity of the DEF tank is 20.0627 litres. Since DEF behaves like water, it will freeze and expand. This does not normally cause a problem if the DEF tank is not overfilled. Adding more than the 20.0627 L usable capacity may not allow for DEF expansion when frozen.

To maximize driving range and to prevent overfilling the tank, the tank should not be filled until the "Exhaust Fluid Range: 1609.34km (approximate)” message appears on the DIC. At this point, up to 313.25 L of DEF may be added. When fluid initially reaches the top of the fill pipe, stop filling and do not force additional fluid into the tank.